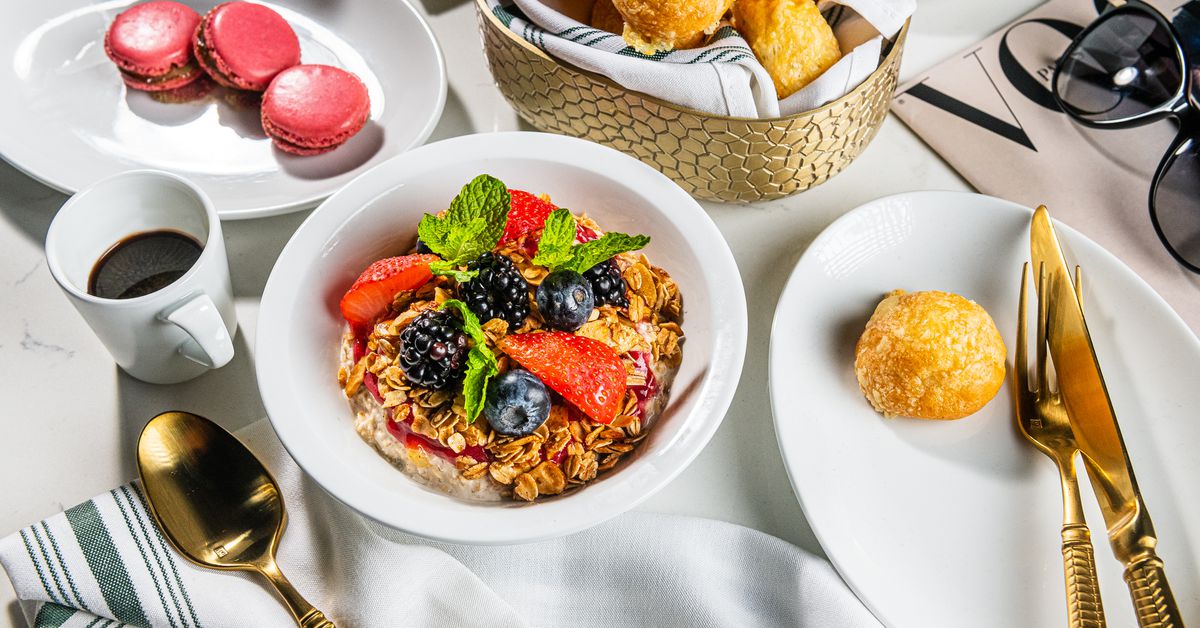 What to eat at Bistro du Jour, the charming new Wharf café with a Parisian touch

A desirable corner of the Southwest Waterfront gets a fresh start today as a French-themed Bistro du Jour, a neighborhood cafe tote for everything from flaky pastries and fresh juice in the morning to duck confit and au champagne at sunset.

The multi-purpose business (99 District Square SW) opens Wednesday, November 3 for each square meal of the day, inviting Francophiles to soak up the waterfront view while digging into béchamel-covered eggs with a fork. and a golden knife. The new 1,700 square foot Paris room diversifies Knead Hospitality + Design’s restaurant portfolio on the Quayside, which includes modern Mexican fare at Mi Vida and wood-fired steaks and martinis at The Grill.

Bistro du Jour executive chef Treeven Dove is running a Knead kitchen for the first time after spending 3 years in the kitchen at The Grill. For the first shot of the restaurant group‘s daily breakfast, served from 7:30 a.m. to 11:00 a.m., its compound breakfast dishes feature familiar French and American classics.

A welcoming plate of any style egg is served with a croissant, bacon and crispy fingerlings, while an order of “Oeufs Sur Le Plat” spreads fried eggs on toasted sourdough with a layer of bechamel sauce. creamy. An omelet filled with zucchini, thyme and goat cheese served with crispy fingerling sticks all night long. The hours extend until 11 p.m. Tuesday to Saturday and until 10 p.m. Sunday and Monday.

For a morning dose of sugar, there’s brioche French toast with blueberry compote and sweet whipped cream and a big Belgian waffle that eats up the entire circular plate. The weekend brunch (11 a.m. to 3 p.m.) largely mimics its morning menus.

At lunchtime at 11:30 a.m., a parade of appetizers and savory dishes worthy of a French sidewalk café joins the mix. Bite-size treats include gruyere cabbage, raspberry macaroons stuffed with chicken liver mousse, and radishes dipped in brown butter whipped with sea salt. Bibb lettuce with avocado, grapefruit, radish, fennel and vinaigrette with red wine is also a good way to start.

“It’s hard to get excited about the salad, but there’s something charming about it,” says Knead co-founder Jason Berry.

A handful of hearty French entrees enter the lineup when dinner hits at 4 p.m. There is the duck confit (duck leg with green lentils and shallots in red wine); coq au vin (braised chicken with bacon, mushrooms and mashed potatoes); and shepherd’s pie with lamb.

To carve out the Parisian cafe of their dreams, Knead worked alongside // 3877 to oversize the pint-sized corner left by Dolcezza, adding a year-round wraparound patio for 66 as well as an interior renovated 36 places. A bakery, espresso and bubble bar, and take-out areas all share real estate around a V-shaped counter.

There’s no room for a sit-down bar, so a short list of spirits showcases the best of the litter. Gray Goose is the only vodka option, for example, and the wine list tops out at 60 bottles. That’s a far cry from the inventory Knead is used to at places like The Grill, which has dozens of vodkas and gins to go with 300 wines. Options are also plentiful at Penn Quarter’s opulent Succotash Prime and Navy Yard’s cavernous Gatsby American restaurant.

Booze at Bistro du Jour also includes French aperitifs made in Marseille and classic champagne cocktails like a Kir Royale with crème de cassis and an Elderflower Spritz made from St. Germain. A short list of bottled beers features beloved Kronenbourg in France.

“Our restaurants are generally behemoths with big menus. It’s been an interesting exercise to play favorites – like which kid do you like the most, ”Berry jokes.

To complete the compact menu with its small bites, the owners turned to their favorite and always crowded cafes in Paris for design inspiration.

“We really paid attention to every square inch of this space – everything is personalized,” says Knead co-founder Michael Reginbogin. “It’s a blend of iconic French design elements with a contemporary twist.”

Parisian-style touches include mosaic floors, blush tones, hunter green velvet banquettes, and monolithic stone countertops. To maintain a laissez-faire attitude, the team decided to ditch the pandemic-era idea of ​​ordering via QR codes at the table and opt for tangible menus.

“Scrolling through menus on cell phones with four people is not [exactly] romantic for a French bistro, ”says Berry.

Thanksgiving dinner could be more expensive this year