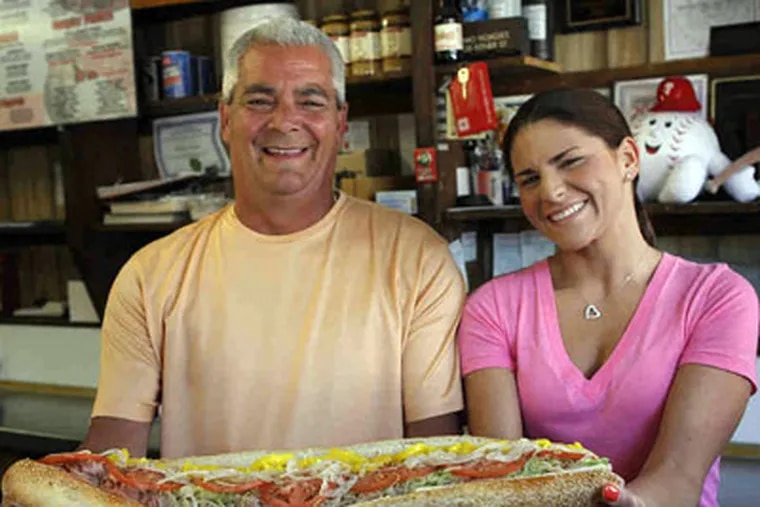 When Richard “Richie” Neigre and his wife, Coleen, opened their grocery store on Ritner Street in South Philly, they only had a few sandwiches available. They didn’t expect waves of people to flock to anything other than groceries.

Even then, Mr. Neigre – also affectionately known as “Primo” – would sit on the stoop of the modest store and encourage people to try his food.

“He would tell people, ‘If you like it, spread it around. If you don’t, don’t say anything,” Coleen said with a laugh.

Nearly 30 years later, this small grocery store has morphed into Primo Hoagies and has grown from a Philadelphia staple to a national chain.

“It turned into something we couldn’t even imagine,” Coleen said.

Leaving a legacy of good food, generosity and extreme devotion to his family, Mr Neigre, 65, died suddenly on Thursday May 5 at his home in Sewell, Gloucester County. The family said it was likely due to a blood clot from previous vascular issues.

“I’ve never been alone in my life since him,” his wife of nearly 43 years said through silent sobs.

The couple met when she was just 14 and Mr. Neigre, 16. He worked with his father, who was then a wood distributor.

They married on June 9, 1979. His wife described a life of love and generosity.

When they were young and looking for a home in South Philadelphia, they saw a model that Coleen liked but didn’t think she could afford. Mr. Neigre told him that within a year they would be living in this house.

Skeptically, she watched him keep his promise, and within a year he built a replica of the house she had fallen in love with.

“He gave me a life I never expected,” she said.

Born October 29, 1956 in South Philadelphia, Mr. Neigre was one of three sons of Mario and Emma Neigre. Their father died when Richie was only 12 years old.

He grew up in a single parent family without a lot of money and didn’t finish high school, but he was still working and supporting his family.

Mr. Neigre and his wife welcomed their first daughter, Audrey, in 1982.

Coleen knew her husband wanted a boy, so when another girl, Colette, was born in 1988, she asked him if he was disappointed.

She remembers him turning to her and saying, “Did you see her? She is beautiful. How could I be disappointed?

Throughout their marriage, Mr. Neigre held several jobs, including at the Philadelphia Journal and at Super Sneaker and All Star stores. From each boss he learned more about business and the couple opened their first grocery store in 1992.

Shortly after the popularity of their sandwiches caught on, they opened a second location in Center City in 1996. In 1999, they expanded to four stores, including one in South Jersey. Around 2001, business was booming for the Neigres and they branched out into franchising. Now there are nearly 100 Primo Hoagies across the country.

And it’s still a family business. Daughters Colette Faia and Audrey Fabrizzio operate different stores in the South Philly and South Jersey area. Their husbands, nephews, uncles and others joined the business over the years as Mr. Neigre and his wife aged and the business grew.

“My husband was all about quality, bread and making different things that you’ve never had before,” Coleen said. “He was making concoctions and we were tasting it and going, ‘Does this look good together?’ As if he made sandwiches that people had never heard of.

All the while, Mr. Neigre’s generosity was shown to everyone. Once he started making money with his business, he helped a lot of people.

“He always made sure everyone he knew had everything they needed. Always. It wasn’t even a question,” Faia said.

She remembered her father as someone who loved music — especially Prince and the Rolling Stones — and always had her own schedule for doing things.

It was not surprising to see him dine at midnight or arrive on Tuesday when he said he was visiting on a Sunday.

One of her favorite memories of her father was his 16th birthday. He had rented a theater for their whole family for the premiere of the first Spider Man movie in 2002. As they entered the room, he pointed to a car that was the one she had wanted for a long time.

“He looks at me and says, ‘Colette, isn’t that the car you want?’ And I said, ‘Yeah, it is.’ He said ‘Happy Birthday’ and handed me the keys,” she said. She only had her license, but her father wanted her to learn to drive on the car she would use every day.

“We were almost the same person,” she said. “I learned everything from him.”

Besides his wife and daughters, Mr. Neigre is survived by one brother, Joseph; four grandchildren; and other relatives. A brother, Mario, died before.

In lieu of flowers, donations can be made to Autism Speaks at www.autismspeaks.org.