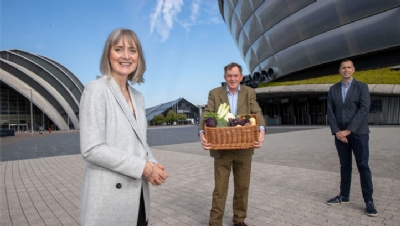 No food transported by plane on the COP26 menu, in order to reduce emissions

The catering company at Scottish Events Campus in Glasgow, which is due to host COP26 in November, has announced plans to ban products flown in the UK altogether.

Pictured: Representatives from Levy UK & I and the Scottish Events Campus at the Glasgow site. Image: levy

Levy UK & I, the company that set the plans, is part of the Compass Group and provides food and drink to conference and sports venues across the UK. In addition to the Scottish Events Campus, which recently updated its own food strategy by committing to source 80% food from Scotland, customer venues include the All England Lawn Tennis Club Wimbledon, The O2 Arena and the Tottenham Hotspur Stadium.

As part of the plans, the ban on products transported by air will take place immediately. Levy UK & I said in a statement he had “developed” the decision throughout the year, working with suppliers and other partners to phase out products flown by air.

The statement explained how the company had to modify certain recipes and menu choices to better showcase local and seasonal produce. Menus will be changed more regularly throughout the year to highlight UK-grown fruits and vegetables that are in season, rather than imported alternatives, the statement said.

â€œThis move is not intended to narrow down choice, but to work in partnership with our sourcing team and chefs to be even more creative in the way we design and deliver dining experiences to our customers,â€ said Jon Davies. , Managing Director of Levy UK & I.

â€œOn the purchasing side, it’s about finding alternatives to air freight that are less harmful to the environment. Many of the green vegetables that can be grown here in the UK are needlessly imported from overseas via this method, resulting in a huge cost to the health of our planet.

“We will continue to supply products such as tropical fruits and avocados where there is demand, but it is about finding producers closer to home – continental Europe for example – or ways to less harmful transport that reduce our carbon impact on the planet, such as the boat, road or rail. “

On Davies’ point on the environmental impact of air transported food, the International Transport Forum estimates that freight accounts for about 7% of annual global emissions, with air freight being one of the most energy-intensive means of transporting food. This challenges Levy UK & I’s ambitions to become a carbon neutral company by 2030 and, of course, the global need to tackle climate change while feeding an ever-growing population.

Davies added that the phase-out of air freight in Levy UK & I’s supply and supply chain has “been a long time. [the companyâ€™s] ambition”.

Other corporate environmental commitments include reducing food waste by a fifth this calendar year and cutting beef use by half within the same time frame.

For the first commitment, it was estimated until recently that food waste represented around 7-8% of annual global emissions. A WWF report last month explained how the proportion could actually be 10%.

For the latter, emissions from livestock are estimated at 15% of annual global emissions. While low carbon beef production methods are common in regions such as the UK, production has historically been high in carbon around the world. By some estimates, beef’s carbon intensity is four times that of chicken and at least ten times that of most plant proteins.

With less than 100 days of COP26, edie has launched a new series that will provide regular temperature monitoring of the global climate action of nations and businesses.

10 of the best dishes of all time