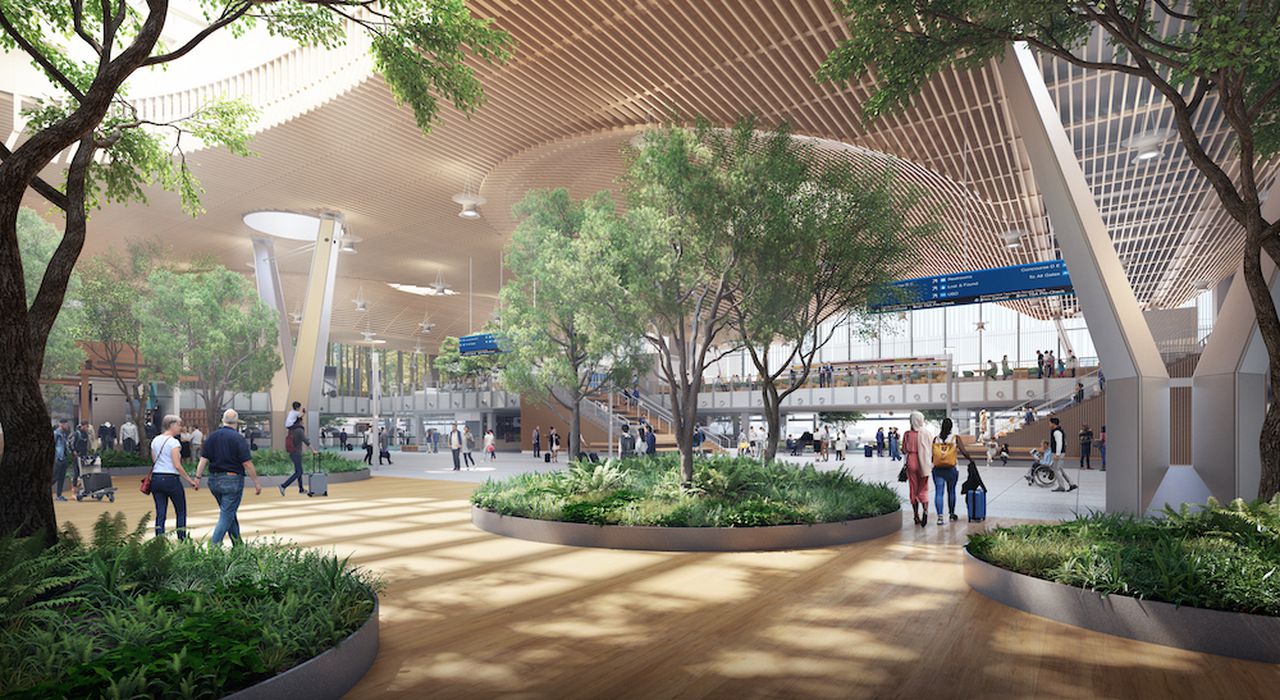 Have you flown in the past year and a half?

Some of you certainly have. Portland International Airport traffic is expected to be around 70% of pre-pandemic levels this fall, the Port of Portland reports, with business travelers new to Zoom likely to be the missing chunk. This is far from last April, when PDX welcomed a pandemic low of 77,000 people, including a day when only 1,500 passengers passed, down 97% from pre-pandemic levels.

For those of you who haven’t been to PDX since the start of the pandemic – and even for those who have, but chose to keep your eyes down and masks up – a return to regular air travel this holiday season means visiting an airport in the midst of a complete reimagining. This includes two new halls, a main terminal still under construction slated to open in 2025, and new restaurant and bar choices throughout the resort.

Below, we’ll explain what’s available to eat and drink in the various halls of PDX, as well as what to expect in the coming months, including great espresso and a suitable cocktail bar, a quick-service version. from one of Portland’s iconic sandwich shops. and local fried chicken brunch options, coming soon to stereo. (The options are listed alphabetically by Concourse, but many of the more exciting new options can be found in E.)

This most ambitious project in the ongoing massive overhaul of the airport will combine the former ticketing area and Clocktower Plaza into one large open terminal spanning an additional 150 feet across the airfield. Above, a corrugated roof made of Northwest wood slats and lots of natural light; on the ground, plants and trees give a park atmosphere. The airport will send out a request for proposals next September, soliciting suppliers to fill the various food, beverage and retail outlets at the main terminal, with the aim of opening some options by 2024. For the moment, Elephant cold cuts and Portland Coffee Roasters are the only pre-safe food options, while the Peet’s coffee and tea kiosk should soon return to the baggage claim area.

Opened in November, the new Hall B doubled in size after becoming the cramped old Hall A, which was demolished. When it opens in November, the new lobby will feature six new Alaska Airlines doors and two exciting airport additions from the local coffee shop chain. Good coffee and destination fried chicken and waffles Screen door, both of which are slated to debut next spring.

The biggest change to come to this restaurant-filled lobby will be Corner store by Lardo, a new take-out version of Portland’s popular sandwich shop. By January, Lardo will take over the former Kenny & Zuke space just past the B / C security checkpoint, next to Stumptown coffee and Capers CafÃ© and Le Bar.

Further down the lobby, travelers can choose from an array of both local channels (Bambuza Vietnam cuisine, Mo seafood, Coffee Yum, Portland Coffee Roasters) and national (Pizza Mod, Belly sandwiches, Mcdonalds, Starbucks). Drink options include wine at Vino Volo, spirits and small cocktails at Western whiskey and 32 beer taps from the always busy Henri’s tavern, the surviving airport location of a Pearl District bar that closed in 2019. (Read to the end to find out my secret to buying $ 2 beers at the airport.)

As for Henry’s, the airport Country cat is the only remaining location of this beloved Midwestern restaurant, which was best known for fried chicken and brunch at its original Southeast Portland location. You will find the restaurant (and full bar) just after security D / E, next to Caper market, itself is home to take-out, ready-made meals, including sandwiches, lasagna, and even raw oysters.

Passengers going down hall D will find a Portland Coffee Roasters, a Burgerville, a full-service brewery from Bend’s Deschutes Brewery and Sushi Hissho, a huge sushi chain with hundreds of locations across the United States, many in grocery stores. The airport is hoping to fill the old Tamale Boy space with another local Latin American option.

After a magnificent remodel, Hall E could become the new wing of choice for foodie passengers. In addition to a Jamba juice, a Portland’s brewery Hopworks Urban Brewery and a Seattle salad bar Conifers, the lobby is already home to the first brick-and-mortar Tillamook restaurant outside of Tillamook itself. Tillamook Market serves a similar menu of branded dairy products as the co-op’s 110-year-old flagship coastal ice cream shop, including fried cheese curds, grilled cheese sandwiches, and ice cream, all available to take out in cooler bags .

In October, Hall E will add a Starbucks and a handful of exciting local options, including one relocated Blue star donuts, a second airport Bambuza and a temporary Lardo take-out option (possibly move to the post-security zone between B and C in January). Stumptown plans to open a second cafe here in the new southwest hub in December.

And early next year, the end of the hall, with its huge new windows and sweeping views of Mount Hood, will welcome Juliet, a new ‘women in aviation’ themed craft cocktail bar from Lightning Bar Collective, the group behind Portland’s Bye and Bye, Sweet Hereafter and Victoria bars. The project, opened in conjunction with global partner SSP Group as well as Portland’s ChefStable, will launch in January with a full bar and all-day menu developed by Dimo’s Apizza owner Doug Miriello.

KNOW BEFORE YOU GO

Three things to know for eating and drinking at Portland International Airport before you go.

What our food critic eats when traveling to Portland International Airport.

I might be the reporter and critic for The Oregonian, but I’m also kind of a tight-fisted. That’s why my favorite part of traveling through PDX has long been the â€œstreet pricingâ€ policy, which requires airport vendors to charge the same amount for every beer, hamburger, or packet of chewing gum they get. ‘they do this in their non-airport locations. Other airports can keep their $ 24 cheeseburgers and their $ 18 IPAs, thank you. I will go to the Made in Oregon store in Hall C, where Pfriem’s â€‹â€‹award-winning IPA and Pilsner cold boxes will set you back just $ 2.10.

I didn’t travel much by plane during the pandemic, but when I flew to see relatives in New York this summer, we stopped in the food court in Hall C for a cheese pizza. benign from Mod (for children) and a grill bowl of Bambuza. Essentially their version of the Vietnamese dish bÃºn thá»‹t nÆ°á»›ng, this bowl of grilled pork, cold vermicelli, and herbs might not be as well balanced as what you’ll find at the best restaurants near the airport (Mekha and Pho Oregon come in mind) . And I never wanted to order it from the South Waterfront location in Bambuza. But at $ 14.50, it’s a relatively inexpensive and reasonably healthy meal that didn’t weigh us down. Flying solo, I might indulge in a naughty bowl of Eugene Coffee Yum ($ 7.95), an occasional habit that a former editor got me hooked on over a decade ago.

We mainly fly in Alaska and I look forward to the opening of Screen door and Good coffee in hall B, where it will have the best espresso in the airport when it opens next spring. But if I ended up in the D / E wing, I might pass Tillamook Market for the fried cheese curds ($ 7), capers extremely well funded Marlet for a few scaled Goose Point oysters ($ 2 each), or curiosity might lead me to the Country cat to see if the once famous fried chicken fits into a sandwich shape ($ 14; although I would probably end up going to the turkey club, $ 12.50). When it opens, Lardo sandwiches to go should be good. And I can’t wait to sip a well-prepared cocktail while taking in a breathtaking view of Mount Hood once Juliet opens early next year.